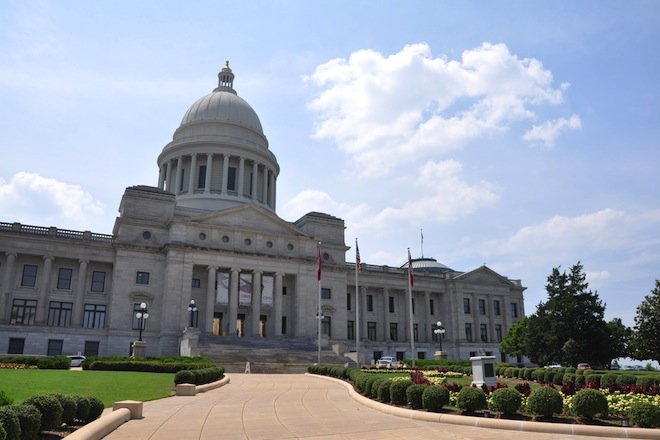 The Arkansas Senate on Thursday voted to refund the fines the state has collected from some businesses for violating coronavirus restrictions, as Gov. Asa Hutchinson prepared to make an announcement about the emergency he declared for the pandemic.

The measure, which passed 19-14, now heads to the House for a vote and was sponsored by a Republican lawmaker who has sued challenging the state’s coronavirus restrictions. That lawsuit was dismissed by a Pulaski County judge and has been appealed to the state Supreme Court.

“It shows our constituents that we are co-equal and working for them,” Republican Sen. Dan Sullivan said before the vote.

Hutchinson, a Republican, said in a statement he opposed the measure “because it undermines fairness, compliance and public health.”

The vote comes as Hutchinson has faced pushback from some Republican lawmakers over the state’s virus restrictions, which have included a mask mandate and capacity limits for bars and restaurants.

“It seems that this bill is more about turf war than the actual decisions and the changes you’re making to code,” independent Sen. Jim Hendren, who is also the governor’s nephew, said to Sullivan during a debate about the measure.

Hutchinson’s office said he planned an announcement Friday morning about the public health emergency and the directives he’s issues. The governor earlier this week said he planned to extend the emergency declaration, which is set to expire this weekend.

The state’s Alcohol Beverage Control Division has collected nearly $38,000 in fines since July, according to a revenue impact statement prepared by finance officials.

The refunds would not apply to any fines levied against hospitals or nursing homes. The bill, if enacted, would not take effect until 90 days after the Legislature adjourns.

Over the past two weeks, the rolling average number of daily new cases in Arkansas has decreased by about 66%, according to figures compiled by Johns Hopkins University researchers.

The Department of Corrections on Thursday also announced that it will resume a pilot program for in-person visitation at four prisons. The visitation had resumed in December, but was halted later that month after the prison system went into lockdown due to a rise in cases.